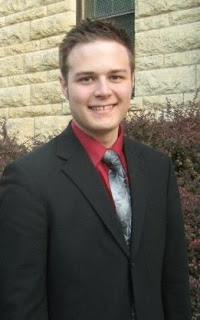 Blaine Miller is a sophomore on the UNO Forensics team majoring in Secondary Education with emphases in History and English. Blaine graduated in 2008 from Bellevue East High school where he served as a team captain for the forensics team.
During UNO's 2009-2010 season, Blaine has competed in five events including Dramatic Interpretation, Duo, Communication Analysis, Persuasion, and Prose. To give an example of Blaine's work, this year his persuasive speech analyzes the foreign and domestic implications of the ever-growing Evangelical influence in the United States military. As of January, 2010 Blaine has four of his five events qualified for the American Forensics Association-National Individual Events Tournament (AFA-NIET) to be held in April at the University of Wisconsin Eau Claire.
When he's not competing or memorizing dates and dialogue, Blaine spends his time relaxing at home with his roommates, two of which are also competitors on the UNO speech team. He also has a part-time job as a DJ at Skate City in Bellevue. Blaine has a particular interest in video and computer games and can rarely be found during downtime with out his laptop nearby.

-By Cameron Logsdon
Posted by Abbie Syrek at 9:22 AM