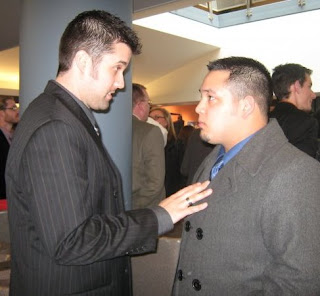 Photo: Ryan gives Cameron Logsdon advice before Poetry finals at AFA.
This week's Speaker Snapshot is a little different. Instead of highlighting one of our students, this post will feature Ryan Syrek, a volunteer UNO coach, who was honored at the Kansas in Nebraska tournament this past weekend.
Ryan Syrek has been active in the forensics community for over a decade. He competed for Creighton University and upon graduation was hired as an assistant coach at Creighton University, followed by the University of Nebraska at Lincoln. He now spends several hours each week and most weekends coaching for UNO. Ryan is a volunteer coach at UNO, donating his time editing speeches, cutting literature, coaching events, and traveling with the team to judge at tournaments. Why does he do this? For the love of the game, of course (the fact that his wife is the Director of Forensics at UNO might also have something to do with it!).
On Sunday, January 24th Directors of Forensics Aaron Duncan (UNL) and Craig Brown (KSU) honored Ryan with the Joe Black Distinguished Service Award. During the award presentation they thanked Ryan for being an "advocate for forensics." They also thanked him for writing insightful ballots to encourage competitor growth and for going above and beyond the call of duty as a behind-the-scenes coach. Congrats Ryan! We're lucky to have you. 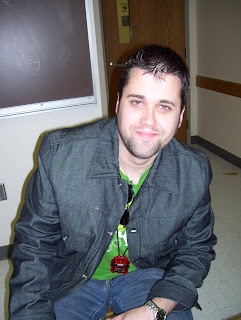