THE RESULTS ARE IN: UNO Forensics Places 8th in the Nation and Cameron Logsdon Wins National Championship! 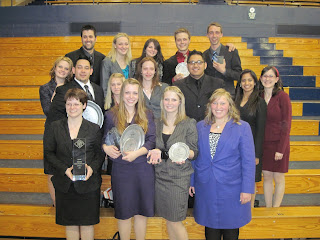 Photo: The team stops for a quick picture after the awards ceremony on Sunday night. Does it look like they've been crying? You'd better believe it!

Well friends, our forensics season has come to a close and we have never had a season like this one. All year we've been asking for donations of time, money and resources so we could pay to travel to the national tournament, the American Forensics Association-National Individual Events Tournament (AFA-NIET). All of you, our friends, family, and alumni, made it possible to go to nationals this spring and we're so glad you did. UNO Forensics placed 8th in nation out of 76 schools and junior Cameron Logsdon became UNO's first national champion!
UNO Forensics traveled to the University of Wisconsin-Eau Claire for the AFA-NIET, March 31st-April 5th. For those of you who are still learning about forensics, the national tournament is so large that events don't break straight to finals. Instead, the first elimination round is quarter-finals (the top 24 in the nation). From there, 12 competitors in each event advance to semi-finals (top 12 in the nation) and from there, the top six in each event become your national finalists.
This year, UNO had 9 breaks to quarter-finals, a school record (the previous record was 5). UNO quarter-finalists include:
UNO advanced three events to semi-finals. Our semi-finalists include:
Three UNO speakers advanced to final rounds (previous record was 2)!
We are also proud to share that junior Allison Henri placed 16th in individual sweepstakes. Awards in this category are given to the top-20 speakers in the nation. Allison has joined alum Matt Eledge (19th place in 2009) as only two UNO speakers ever to take home an individual sweepstakes award. 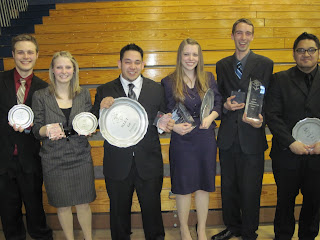 Photo: Meet your UNO out-rounders! Blaine Miller, Tessie Stednitz, Cameron Logsdon, Allison Henri, Brian Robinson and Iven Mendoza.
Finally, for the first time ever, UNO cracked into the Top-10 and placed 8th as a school. The highest UNO has ever placed at the NIET was 13th (both in 2008 and 2009). Although placing in the Top-10 was a glimmer in our eye, we never thought doing so was actually possible. But we did it! And now the coaching staff has to cash in a few bets they made with the team. Let's just say that coach Vanessa will soon be sporting a blonde head of hair, perfect for summer! And did I hear someone say tattoos? Yes, coaches Abbie and Ryan will get inked! :)
To say that we owe this success to all of you, our devoted, loving family, friends, and alumni, would be an understatement of epic proportions. THANK YOU to each of you who attended chili feeds, bake sales, and Night Before Nationals. THANK YOU to each of you for donating to the team to make this dream possible. Thank you to Dr. Jeremy Lipschultz, Director of the School of Communication for paving our road and being a constant supporter of our students. Thank you to Dean Gail Baker (College of Communication, Fine Arts & Media) and Chancellor John Christensen for their support of our program. UNO Forensics is part of all of us. We did this together, and now we can celebrate a season that still has Ryan and I wondering if it actually happened. Here is to you!
Posted by Abbie Syrek at 6:34 AM