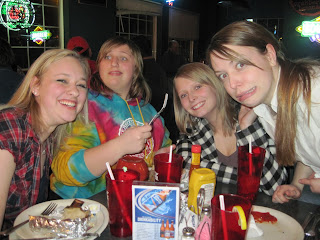 Photo: Stephanie Larsen, Eastin Yates, Tessie Stednitz and Allison Henri enjoy a team dinner on Friday night.
The forensics team had an amazing state tournament on February 20th. We traveled to Doane College to compete against the other amazing schools in our state. On Friday night the team enjoyed dinner at the 9th Street Grill (see photos above). The tournament began early Saturday morning and UNO had a great showing! In addition to having five state champions in six events, UNO won the state Quality Award and placed 2nd in team sweepstakes. 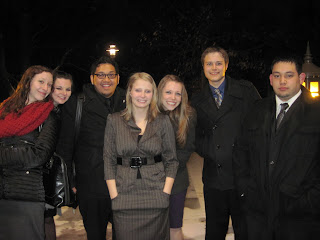 Photo: Jonna Rebensdorf, Cortney Griffith, Iven Mendoza, Tessie Stednitz, Allison Henri, Blaine Miller, and Cameron Logsdon stopped for a photo after the awards ceremony.
In addition to this competitive success, UNO was very pleased to have three students nominated for the Spirit of NIFA Award. Each school in the state nominates two students for this award who demonstrate leadership, professionalism, and success both competitively and/or in leadership roles. Three UNO students were nominated by other schools for the award: Niveditha Rajagopalan, Brian Robinson, and Eastin Yates. The winners were both from UNL, Taylor Sloey and Mallory Marsh. Congratulations to two outstanding students for this well-deserved award!
Finally, as was mentioned above, the state tournament is unique because the top two speakers in Oratory advance to compete at the national Interstate Oratorical Association tournament at the University of Oklahoma in April. Niveditha Rajagoplana placed 2nd in Oratory, Amanda Bouc from Doane College was the champion of the event. Both ladies will travel to Norman to the oldest public speaking competition in the nation. Good luck! 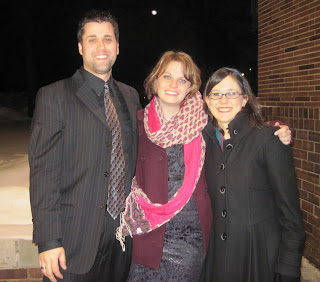 Photo: Three very happy coaches! Ryan Syrek, Abbie Syrek and Vanessa Hatfield are all smiles after the state tournament.
Posted by Abbie Syrek at 7:30 AM